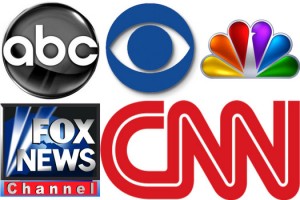 So I’m a journalist, right? I’m published (and not just on my own blog); I (almost) have a journalism degree; I know the difference between who and whom; and that just because a story involves the Kardashians, it doesn’t necessarily qualify as news.

Today in the news studio, a fill-in camera man was making conversation and asked me whether I was Republican or Democrat. Now, for starters, I hate that question because politics aren’t a matter of black and white, or red and blue. I don’t fit into any one category, nor do I think that politics are measured on a scale, like sexuality. More like, politics are measured on an axis. There are numerous factors and dimensions. But rather than babbling on and explaining the polarity of politics, I just said “Sorry, I don’t answer that question.”

I know, I’m so mysterious, right?

Really, I’m just careful. When I mention that I’m a journalist, people immediately label me Democrat, one of those evil “leftist media types.” Which isn’t true at all. I’m not Democrat. I’m not Republican, either. I’m Marian Daniells, bitches, and don’t ya’ll forget it.

But all silliness aside, people are very critical of the media. The media is biased, they say. The media only tells us what they want us to know. The media only pushes their own agenda and exploits innocent people in the name of journalism.

To which I say…

But sometimes, there aren’t two sides to a story, and that’s that. Media is still biased, and if consumers are stupid enough to think that this is the only industry that is biased, they’re kidding themselves. Media is biased because media, dear friends, is first and foremost a business.

We’re not a government-funded public service—we’re individual, competing businesses, working terrible hours for terrible pay and trying to combat impossible challenges like the big, bad Internet, and a world of consumers accustomed to instant gratification. Consumers demand, and we do our best to deliver.

So the media is biased, you say? Then do something: Start a blog, a community pamphlet, a podcast, a news station, a letter to the editor. Tell us what you think and what you want. But the point of the big, bad media business plan is not to brainwash and psych the American public. The business plan—like any business plan—can be boiled down to a pretty simple bottom line: Make money. No matter the news medium, the (ultimate) point is to sell ads. And in order to ensure that advertisers pay us, we need to keep up reader- and viewership. That’s you.

We report what you want to see or read. Simple as that. And if you don’t like it, change the channel, cancel your subscription, and tell us why. When we see people speaking up, or changing the channel, we change our style accordingly, we adapt. But don’t just blame the media. We’re not all crazy Green Party activists determined to brainwash the general public. We’re not the bad guys—not really.

We’re just trying to pay off our student loans.