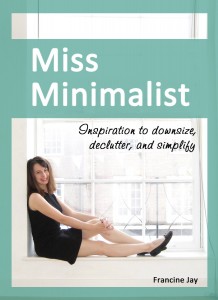 I mentioned yesterday that I was whizzing through Francine Jay’s Miss Minimalist. Don’t stress—it’s really short, and if you can’t splurge on the 99 cent Kindle download, just head to her blog and get a taste for her minimalism taste and philosophy.

I’ll try to summarize: Minimalism (and “minsumerism,” being a minimalist and conscientious consumer) is a means of “sticking it to the man,” by acknowledging that not only does one not need much of their “stuff,” but they don’t even want it. As consumers, we’re bombarded with advertisements and ever-changing trends that tell us that we need something new. Minimalism says, “No I don’t, thank you very much,” and advocates that we only consume what we truly need.

A brief story of mine: Recently, I really, really wanted this cute elephant pillow from Francesca’s (because elephants are pretty darn cool). And so I bought it for myself. But only a few months later, I donated it. Turns out I guess I didn’t want it as much as I thought. And it wasn’t sophisticated enough to go with my decor. Wasteful?

Jay’s take on things: Minsumerism has many benefits—Less stuff means less stress, because you don’t have to worry about insuring, maintaining, and monitoring all of it. It also means more freedom, because you aren’t grounded to your “stuff.” There’s less pressure to keep up with the trends (because you don’t know or don’t care about them), and you subsequently save time and money that would otherwise be spent acquiring aforementioned “stuff.” On a grander scale, less stuff means a greener planet (none of those icky CO2 emissions from transporting stuff from China, and a more ethical one, because minimalists make conscientious purchases and by not harboring so much crap, the world’s wealth is distributed a little (teensy bit) more evenly. Oh, and it makes you happy. Not a bad argument.

A brief story of Jay’s: When Mr. and Mrs. Jay’s house was broken into, they had so little “stuff” that the burglar walked away with a portable CD player, an empty purse, a lipstick, and a ziplock bag of Canadian coins worth a couple of dollars. Nice job, dude. She writes that the only things really worth stealing—iPods, cell phones, cash, and wedding rings—were always on her and her husband. There was literally nothing to steal.

My take on all this: There’s a lot I agree with about Jay’s minimalist philosophy—weeding out the stuff I neither want nor need; keeping with classy, timeless pieces that don’t necessarily follow “trends;” and I think the idea of being a conscientious consumer is a very eloquent thing—I think that evaluating a potential purchase’s score 1-10 factors in a lot of different concerns, and I don’t see why ethics shouldn’t be up there with quality.

But there’s a lot about Jay’s philosophy that’s doesn’t necessarily jive with my Perfect 10 ideals. Perfect 10 is about quality and lasting style, about recognizing and reflecting one’s personal style, not whatever the media decides to endorse that week. Perfect 10 is about identity and quality, but perhaps it is not necessarily about minimalism, at least the pseudo-Buddhist kind of minimalism that Jay espouses. I don’t want to always feel like I’m living in a barren hotel room.

Jay advocates that we only acquire what we need, and I think that having some of the things we want is just as important, if they are in fact things that we want. And distinguishing between the want-it-nows and want-it-for-keeps takes time and clarity. Some creature comforts are okay, but within reason.

Perhaps it’s a taste thing, because while I appreciate a clutter-free space, the bare, white rooms that Jay posts pictures of are not comforting to me. Having moved so much, I want a place that I can return to that feels like it reflects my style, tastes, and interests. I want warmth and a big, fluffy comforter. I want real furniture, not IKEA. And that’s okay.

The takeaway: Even if our ideals don’t mix entirely, there’s still much to be gained from learning about the minimalist philosophy and lifestyle. It’s important to get rid of clutter, rather than just organize it. One of the most useful takeaways was a philosophy that my mom has always touted, as well: don’t purchase anything that does only one task (that means you, toaster).And I do agree that less stuff means more money in one’s pockets. But I also think that there is some sense of zen and comfort and happiness that comes from a true 10 purchase. Plus, I just can’t bring myself to adopt her style. Too hippie chic for someone working in PR.