The first week of my sophomore year, my roommate came home to find me half asleep in the bathroom, my head resting on my arm, while my stomach kindly emptied its contents into the porcelain abyss. The gem that she is, roommate went out and bought me Pepto, and chicken soup.

Contrary to popular belief, I am not a partier. I think alcohol is best utilized in cooking, and hard alcohol is more or less the most disgusting thing ever (Ever noticed how vodka smells remarkably like nail polish remover? Gross). So let me be clear: I wasn’t drunk. 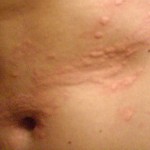 No, I was vomiting up pierogies.

With the help of the Pepto and club soda and very bland naan for the next day, my stomach finally let up—just in time for my body to break out in hives. We’re not talking little bumbs where the nickel from the button of your pants rubbed you the wrong way. Full. Body. Hives. And eventually, I landed myself at 2 a.m. in the local hospital, stripped down to my skivvies, as a very attractive doctor poked and prodded my miserable skin.

There wasn’t a whole lot he could do. He diagnosed steroids, and sent me on my way. We figured I was having a reaction to a preservative in the food, but without a strict elimination diet (complete with breaking out out all over again) there was no way to find out. 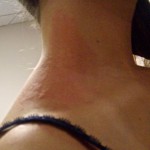 Annnd that was that. It wasn’t a problem for years (granted, for one of those years, I ate almost exclusively organic, and I seldom eat meat).

Then, a week into moving to Paris, I woke up in the middle of the night, and by back was covered in bumps. FOR DAYS. I took the last of my Zyrtek, and cold showers, and drank water, hoping to flush my system.

And then it happened again two weeks later, and I determined the culprit was this prepackaged carbonara and noodles thing (cut me some slack—shopping in another language is hard).

So, I obviously never bought the pasta again. And then, about a month ago, my hands broke out up to my elbows (worth noting: it’s always a different part of my body). I hadn’t changed soaps, I hadn’t done anything. I was walking through the Musee D’Orsay and my hands suddenly looked like a newly plucked chicken.

So I did some research (I’m a journalist. Research is my jam), and compared the ingredients in both the pierogies and the carbonara. There were two chemicals in common:

So I’ve tried to avoid all chemicals. And for the most part, I’ve been really good. Except that I had company for the last week and a half. We ate out a lot and went out a lot, and basically, I’m exhausted. The idea of cooking yesterday (which I couldn’t do anyway, because all my dishes are dirty) was about as appealing as banging my head against a wall.

So I picked up a WeightWatchers meal (*cue shocked gasps*). Scandal, I know. But I’d had the brand before with no issues. It was right at the checkout and took two minutes to cook. I could be fed, changed, showered, and curled up for a nap in less than 30 minutes. Oh, so appealing.

It was delicious. I relaxed yesterday, post-class, and read for hours, switching between three books whenever I got tired of the storyline or genre. 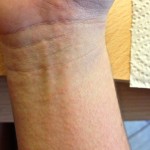 Glorious, right? And then I wake up this morning with hives from my wrists up to my hairline. What. The. HECKKK?!?!

So, in true Marian form, a new resolution (for my soon to come 2013 Bucket List!): I will either, (a) figure out exactly which combination of preservatives drives my body bonkers, or (b) go back to the expensive, but undeniably healthier organic diet.