Ventfest: My Future (and the Lack Thereof) 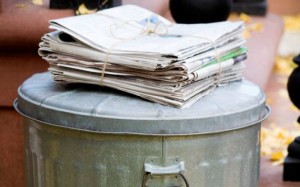 They other day, a colleague approached my coworker-slash-friend and asked her if she was still thinking about going into journalism (presumably after having seen the turmoil in the office). “Get out now while you can,” he said.

I’ve been told in nearly every lecture that these are perilous times for an aspiring journalist. As people are pushed out of jobs and comb the job market, the market is flooded with talent and experience and people hungry for work. I knew that coming into this game. I know it still. But I always had such confidence in my talents as a writer that I figured things would “just work out.” They have before, right? I prepared myself for other potential outcomes by taking on a business minor and learning more technical skills (websites, photography) that add to my value. But that’s all so minimal in the face of my industry’s reality.

I found comfort in the fact that I would likely end up in magazines because they suit my writing style. Plus, in contrast to newspapers and “traditional media,” magazine sales have actually increased over the last decade rather than declined. And in theory, they’re less stressful with less frequent deadlines and less “hard news.”

But… But one of my favorite small time magazines just fired their entire editorial staff. Not comforting.

After my fairytale Marie Claire dream turned into a stressful and hungry six months, I switched my focus from “women’s interest” magazines to health publications. Magazines like Prevention and Women’s Health and Men’s Health and Runner’s World. Note, all of those magazines are produced and published by the same company: Rodale. Rodale is headquartered in middle-of-nowhere, Penn., so I would theoretically be able to avoid the craziness that is New York. They advocate living “wholly” and sustainably, serve local and often organic food in their cafeterias, have in-house yoga studios, their own farms, and reimburse gym fees. They write about health and fitness and well being, and they live it too. They practice what they preach. Or so it would seem.

But yesterday, when I was stalking the company (and thinking about doing an internship there as my last co-op), I found nothing but negative comments from disenchanted employees. It’s a family owned company, so the CEO is reportedly not well-versed in running a business. And there were numerous comments about how management is more interested in personal gain than furthering the success of the company. Also, nearly every comment said that there were few or no opportunities for advancement through the ranks. There have been no raises in the last three years, and anyone who wants to advance (Read: anyone with ambition and talent) leaves to find employment elsewhere.

To a dewy-eyed young journalist (That’s me. I’m not dewy-eyed, but whatever.), this information is like being punched in the ovary, like having my ears boxed, like finding out too young that Santa doesn’t exist. I feel like the last three years and $150K  have been a waste. I mean I’m putting just as much into all this as an engineering major, yet my prospects are bleak, and my salary–if I can manage to find employment–consistently lower.

One of my friends is a recent Northeastern journalism major grad, and for a while was unemployed and living off of the sale of her car and leftover college loans. Yet she’s talented. And all around a wonderful person, and she now manages to provide for herself with writing and photography. So I have to believe that there is hope.

When I opted to pursue journalism, I resolved myself to the fact that I would never have a ton of money. But I figured I would be freer, happier, and getting paid (however little) to do something that I loved. I had no problem with the prospect of living out of a backpack and hitchhiking my way across the world. At the time, I never wanted to get married or have kids. I didn’t want to be tied down, and I preferred adventure to a white picket fence.

Things have changed, and I’m nervous about what all is in store for me. Inversely, as the industry struggles, my wants and costs increase. It’s a tricky path to be on, and a harsh reality to face. I’m confident in my writing, but I’m not so sure my writing can afford to support me and my travel aspirations and my future family. Journalists are not required in order to ensure that the world runs smoothly. I’m not a doctor, I’m not a pilot, I’m not a business owner–heck, even trash men do more for society that I do. I am disposable. And that’s downright depressing.