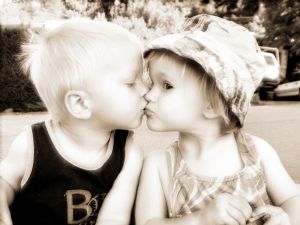 I was talking with my friend this morning and she mentioned that she’s only had eight crushes in her life (she can name them all) and her first crush was in fifth grade.

I kind of guffawed. I’ve had something like 80 crushes in my lifetime and my first crush (whose name I–shocker–can’t remember) was in preschool. We were both toe head blondes with matching bowl cuts and we would run around the playground holding hands and playing tag. It was true love.

When I realized that not everyone is as boy-crazy as I am, I did some self-reflecting. And I am one of those people that just love falling in love. Or at least the idea of it.

Before I bury myself, I should add a disclaimer that I have an incredible boyfriend whom I love to pieces. And I’m speaking about crushes in the abstract and from my experience for the last umpteen years of being single, not about any crush I have now. But aformentioned amazing boyfriend is like a crush times ten… everything that is wonderful about crushes is ten times better when they make the crush-to-boyfriend transition.

But (in the abstract), crushes are amazing. A true crush gives me reason to wake up in the morning and get dolled up. When I have a crush, I walk a little taller in case he ever happens to see.

My favorite are the crushes that you never actually talk to (I’m 12, I know). Like sexurity guard, for those who remember that flustercluck. The kind that you hold eye contact with for just a second longer than normal… It’s fun because it’s the most immature, goofy behavior.

I guess that’s what it is.. Crushes are fun. They’re all coyness and games without the potential risk a relationship entails (though greater risk means greater reward). A relationship is better, I have to say. But when I’m too busy or poor or uninterested in a relationship, a crush is fun. It’s long looks and flirty texts and a little harmless Internet stalking… It’s a little taste of romance, that feeling of maybe potentially loving some stranger. It’s the idea and the dreaming up someone without actually dealing with the awkwardness of talking to them. It’s all games.

At least until I spill a latte on the poor guy.