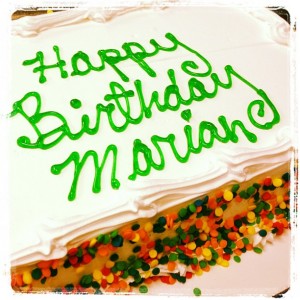 My coworkers surprised me with an ice cream cake 🙂

This happens every year… I look back on where I was for my last birthday and feel like I’ve grown immensely, like I’m altogether a different person than I was 12 short months ago. This year is no different. As I round out my first 20 years, I celebrate surviving teen pregnancy, and I celebrate life. Because nothing is more thrilling than wondering what the next year will bring, and what I’ll be thinking about a year from now after having traipsed around Europe and The Middle East and (finally) having moved into my new apartment. I’m young, I know. And I always feel like my birthdays are catching up to me. I’ve felt 20 for the last six months, but I’m only just now turning that page.

Last year, I compiled a list of 19 things I had learned in my 19 years of life. And while they’re all still true (especially the bits about sexy underwear and neon toes), There’s more to add. So I decided to dream up another list of things I’ve learned, especially things I’ve learned in the last year. Things that maybe struck me or made a big impression on me. To say that the past year has been eventful is the understatement of the century, but I’ve grown from it all, too. And in the end, I suppose it’s what we learn that counts most. There are only seven this year–some silly, some serious–but all meaningful in their own ways.

Lesson #1: I’m a lot younger than I think I am. As I mentioned, every year I look back and marvel at how young I was one year before. And I know that my next birthday will be no different. I talk about being an old soul, and in many ways I am. But I’m still a child, too. And there’s some sort of freedom in knowing that and taking advantage of it.

Lesson #2: Simplicity is underrated. Last year, I went on my perfect-ten-fest, and this year, I’m on a similar simplicity-fest. I can’t even adequately communicate how cleansing it is to throw away boxes and boxes of crap. Clothes I don’t wear, books I don’t read… I don’t need any of it. I used to marvel at how guys could get by on so few clothes and products. But they’re onto something; the simplicity is fantastic. In packing and preparing for Paris, I’m bringing only a few of my favorite things, the things I truly couldn’t live without. And why shouldn’t I live like that all the time?

Lesson #3: Gorilla glue fixes everything. This is a little bit more literal than chocolate fixing everything. But I drunkenly went on some rampage talking passionately about how awesome Gorilla glue is. And I have to admit, it fixes a lot. In December, I dropped a mannequin on my toe and for the last six months, gorilla glue has kept the toenail from ripping apart. Sexy, no? But truly, it’s nice to know there’s something when things literally fall apart, not just figuratively.

Lesson #4: Let go. There are some things I’ve learned that I have little control over. Whether it’s leading a student staff to produce a magazine, or watching my family respond to death… Sometimes, I have to put my inner perfectionist aside, gulp down my opinions and criticisms, and just let things be. This used to be a struggle, but it’s become more and more easy. I need to take care of myself and my own sanity first, and sometimes that means letting other things fall as they may.

Lesson #5: Indulge. This is one of the most fun ones. Along the same lines of taking care of myself, sometimes I just need to indulge. Whether it’s buying a ring that I’ve craved for two years, or an overpriced purse that suits my every need, or a couch set, or a new bra–sometimes it just needs to be done. And there’s absolutely nothing wrong with that. Spending money doesn’t have to be a scary thing. It just should be an informed decision.

Lesson #6: A relationship needs more than love. This is one of the more serious, and challenging to realize, but sometimes loving someone isn’t enough. Love does not equate to willpower; it is a factor in the equation, but sometimes it can’t fix everything. Sometimes relationships fall apart, sometimes people abuse relationships and then jump in front of a car… just saying. But that doesn’t mean you can’t love them anyway.

Lesson #7: Bite your tongue. I’m a fan of words, and I enjoy crafting them to get what I want. But in all honesty, some things are better left unsaid. Sometimes, it’s better to bite my tongue than share unnecessary opinions or details. Sometimes people are shitty. Sometimes crazies call and want to yell at me when they don’t know who I am. Heck, sometimes people loot corpses. Fuck them. They suck. But telling them that won’t necessarily help the situation.

Ok, come to think of it, this wasn’t as fun a list as last year. But I used up a lot of good ones a year ago, and many of them still hold true. Here’s to 20 years of life, and to the next year of adventure 🙂 Happy birthday to me!