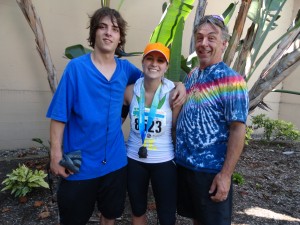 Don’t let the smile deceive you; I felt like death.

This is just a little update to say that I finished America’s Finest City Half Marathon on Sunday, August 19! Another bucket list item knocked off, kachingggg.

Yes, I crossed the finish line, and it wasn’t in an ambulance like three other runners. But I won’t pretend like I set any records. I’m still proud, but mostly I’m just proud I didn’t die.

The first five miles went really well, and I was keeping a consistent 9.5 minute mile pace (great by my standards. I’m made for sprinting, not distance). And then I had to pee and that ruined everything.

Just kidding. But I did have to stop and it killed my momentum. And then by mile 8, I couldn’t feel my legs and I kept getting chills because my body was having a tough time regulating its temperature (For those who aren’t aware, that’s a really bad thing).

And then there was mile 9, where I met an angel of a man passing out frozen towels. Best. Thing. Ever.

I walked roughly three or four of the 13.1 miles. And when I came around the last corner, my parents were screaming for me. But if you look at the pictures (I didn’t purchase any, but I looked), my face is a sickly grey color. I was struggling.

But I crossed that baby, and under the (admittedly generous) time limit; I have the medal to prove it!

I haven’t run since Sunday—mostly because I’ve been limping for half that time—and I’m okay with that. But turns out I’m now running another half marathon in Rockport, Mass. in May. It’ll be much cooler and this time around I’ll be sure to be a lot more prepared: I’ll run with those weird gel food things, so I don’t sputter out at mile 8; I’ll train better and harder and longer and faster; I’ll find an insert for my right shoe, since I recently learned that my left leg is significantly longer than my right. Plus, it’s almost guaranteed I’ll beat my personal record.

**Many thanks to those who donated and helped me raise $550 to help fund cancer research!