I’m writing this post in the middle of April, but won’t be publishing it until I’m in the Bahamas (wahooo!!) due to publicity issues and the minor, minuscule detail that the book I’m talking about doesn’t come out until May 3. Be jealous.

It’s been a goal of mine during co-op to read a lot more than I have since I’ve been in college. The unfortunate truth about being in school is that academic reading–and just about everything else–comes before reading for pleasure. I keep an ongoing list of books on my computer desktop that I want to/plan to sometime down the road read.

As it turns out, my lack of television, Internet, radio or any other means of cheap entertainment (besides people watching) means that I have been reading a lot since January. Admittedly, some books I don’t bother to finish, for a variety of reasons. Some are crap. Some are difficult to read quickly, so I put them off till a later date. There’s just something so addictive-ly satisfying about reading a book in a weekend. I feel accomplished and educated and witty. And when that same book makes me laugh until I tear up, all the better.

For anyone who’s ever had anything shitty happen in their life, please oh please pick up a copy of My Boyfriend Wrote a Book About Me by Hilary Winston. I literally just finished it and then hopped on a (borrowed. Sorry, Lloyd) computer to write about it.

I mean, anyone who can incorporate “It looked like I shit out an alien shitting out an alien” into a published work has got to be either genius or psychotic. Or both. Either way, I looked psychotic as I was reading-slash-laughing-hysterically in a Union Square cafe yesterday.

Winston recounts the most hilarious anecdotes about her single and dating life, including the humiliating true story about the fact that her ex-boyfriend, Kyle (you can cross that name off of my future potential husband list) wrote a “fiction” about her. Given the content of his book, the only thing that was fiction was a minor anecdote about how he may have once jizzed in Winston’s color treatment conditioner bottle. Classy.

Winston starts with her elementary school crushes and the boys who crushed on her, recounts her numerous gay ex-boyfriends, her first loves and her ongoing love of her cats (R.I.P. Emmett). Her stories are both hilarious and instantly familiar. And her background in comedic writing makes this book come off like a raunchier David Sedaris. Maybe funnier. Though I’ve never spent a night in applying Proactive and cold presses to my cat’s chin acne, I get it. And I’ve probably done worse.

She keeps boxes of her exes stuff, like any self-respecting, emotionally-cutting girl would, and lists (yes, mine are color-coded) of ex-boyfriends.

Winston makes me think back on the hilarity of those first boyfriends, on the we-think-we’re-so-grown-up talks over pre-teen sleepovers, on those awkward, post-breakup lunch dates. I would love to sit at a table with this woman and share horror stories. Maybe even start a support group. Or a chat room chain. Something. Someone needs to appreciate the retrospective humor of my life. But I could never tell it like Winston does. Nor would I necessarily feel comfortable using the poor kids’ names. She’s got to be the coolest fat-assed cat lady ever.

She ends on a sweet tone though. Her book, though full of details and lingering bitterness, is no Taylor Swift revenge ballad. It’s just fact. Funny, outrageously uncensored fact. And unlike Kyle’s scam, you can find her book in the non-fiction section. If it hasn’t sold out already. 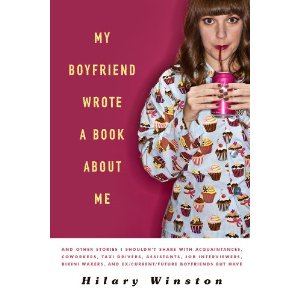