Poem: Did you know?

That according to MapQuest,
It would take 17 hours and 34 minutes to get from here to you.
I bet I could make it in less time.
Just load a car (I don’t know whose) up with country music and caffeine,
Drive for a while. Stop at random intervals. Make friends with truckers.

All to see your face, then kidnap you and take you home with me.
On the way back, though, we’d have to stop in Kalamazoo.
Because it’s freaking Kalamazoo.

We could just drive, and I wouldn’t speed so much on the way back.
We could mozey our way through the frozen countryside.
And by the time we finally get back to New York, we would be caught up on everything.
As if two years had only been two weeks.

That I’ve probably spent more money on postage the past 16 months, 2 weeks and 4 days,
Than I have on shoes.
That’s a high honor, my friend.

I once wrote in a letter that you and I move forward in our lives,
Our paths “parallel, but never intersecting.”
Occasionally, an archaic bit of snail mail bonds us together momentarily
Like a rung on a train track.

You and me, bonded together, connected for an instant, then not.
Never touching. Never talking. Always an arm’s length away.

That the only thing I’ve loved since you went away was my job,
As if all the frustration could be processed, filtered and recycled as witty banter,
As book reviews and blog posts and pointless tweets.

But sometimes that filter breaks and all the frustration comes out and i forget to use punctuation and sentences and i just write to you about everything that comes to mind and inevitably overwhelm you with feelings youre all too familiar with and just confuse the heck out of you and i try to find the barrier between logic and emotion because when im in control and theres logic then i can talk myself through all of this but when its emotion then all there is is
You.

That all those months ago, when we met
That I would be your closest friend and confidante.
That you would talk to me more than to your mother.
That I would still be here.

You wrote once that you hoped I’d always write you,
That typically, people just fall away after six months or a year.
And I’ve had my dry spells, but I’m here. Still.

That if we ever do intersect… If we were to take all our letters,
And string them together in a book,
They would tell such an incredible story. There is so much truth in writing,
Like a personal truth, a genuine truth. Maybe that’s why I love it so much.

People could read our letters and witness all the changes that we’ve experienced.
They could laugh at our silly nicknames and at the way you use circles instead of dots
Over your i’s.

They could know us like we know each other.
And we could sell a million copies and buy houses in New York and Utah and California
And just ship back and forth between them all.
And they’d look back and say

Shoot, it’s all because some silly girl just got in a car and drove.
And now I’m off in shouldawouldacoulda land. When I’ve told you that logically, it doesn’t work.
I know that…

Parallel, but never intersecting.
Two separate worlds.
Two very different people.
But one summer together and you threw me all off. 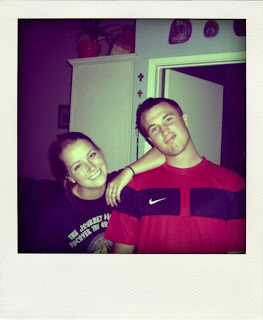