I’m having a Jimmy Neutron-esque brain blast right now and am seriously praying that my fingers can keep up with my flow of consciousness.

So, to start, I’m reading Eckhart Tolle’s The Power of Now and have been reading it with a grain of salt initially. In the first couple of chapters, he challenges the reader to turn of their “thinker,” to stop overanalyzing everything and thinking about everything and to stop identifying their “self” with their “thinker.” My problem with that is that I love the thinker within me. I love the random junk that comes pouring from my fingertips in regurgitated brain barf that, like a craftsman, I work to shape into digestible sentences and thoughts. Sometimes, when I channel that “thinker,” it’s like everything just explodes and my head is so full of creative inspiration that I can’t possibly contain it. That’s when I write.

I did understand the importance of turning off the brain, though. In my experience, I’ve learned the few times my head is quiet are when I’m driving, running or singing. And, really, if you think about it, that makes a lot of sense. During each of those activities, I’m so hyperfocused on everything going on around me that I’m completely in the “Now.” When I drive, I’m monitoring my mirrors and the traffic and constantly revving myself up to be prepared for whatever may happen. When I run, I’m focused on my breathing, my heart rate and on the predictable pace of my feet. When I sing, I’m focused on my breathing, my control, my tone, my expressions, the sound and emotion and performance. During all of them, I’m only Now.

So while I initially recognized the importance and the benefit of shutting off the thinker, I thought it was something I didn’t want to do. Until I realized that “brain barf” isn’t the thinker. Brain barf is Now. It’s a tool I use when I channel something so internal and pure and let it flow past my head, past my filter, through my metaphorical veins and onto my computer screen. I didn’t realize it, but it’s not brain barf at all. It’s Now barf.

I also didn’t realize until today, but since I was about 12, my mantra was “Live in the now, never regret.” I made what some people would call mistakes at a young age and I was so sick and tired of dealing with other people’s responses that I just said “forget this.” I chose to largely forget my past, to move on, to seek the thrill of spontaneity and of living on the edge. And I chose not to think of my “mistakes” as mistakes. I chose not to regret. I chose to learn from the situation, make any necessary changes and move on. Little did I know, but I’ve been far more enlightened that I could have ever realized. I had the pieces to the puzzle, just no guiding picture to help me place them all together.

I’m not even half way through the book and am having revelations. Just today, I was reading about how Tolle says that harnessing the Now is a way for people to evolve.

“What we are doing here is part of a profound transformation that is taking place in the collective consciousness of the planet and beyond: the awakening of consciousness from the dream of matter, form and separation. The ending of time. We are breaking mind patters that have dominated human life for eons” (55).

When Tolle talks about Now, he talks about the intense focus, the hyper sensitivity. He even sometimes describes it as another dimension. When we see our world through the lens of now, it’s as though a filter has been removed. It’s more focused. It’s life in HD. When I thought more about “focus,” I went on some thought roller coaster and started thinking about the “collective,” and how so many more people are being diagnosed with ADHD.

At Marie Claire, I often had trouble focusing. I couldn’t think straight, I couldn’t process, I didn’t feel motivated. I don’t know where I was, but I wasn’t in the Now. I was, like, floating in some timeless blurry observation tank, watching everything happen around me, the movements slow and the sound muffled. And I don’t know what it is, but that’s been happening more and more frequently. So I’ve looked into certain things that might help fight that, help motivate me and help me be more focused. Caffeine helps in the short term, endorphins and yoga are always useful… But I’ve been looking at drugs as well. I don’t know if that’s the answer to my problem, but I’ve seen the benefits that meds have on people around me. And it’s worth an honest conversation with a doctor.

So when Tolle talks about the collective consciousness of the world, I can’t help but wonder that maybe we’ve already digested his teachings. I mean, obviously, there’s always more to learn. But people jump in and out of the Now on a whim nowadays. They can harness it by chasing thrills or adrenaline, by running or by popping a pill. And they can escape it by drowning themselves in a book, playing video games or drinking a beer.

In a weird way, I think there’s a lot of truth to what Tolle argues. I just wonder if perhaps his 12 year old book is a little outdated. Maybe Adderall is the new Now. But then again, finding the Now in a pill is certainly not enlightenment. Food for thought? Or maybe I’m succumbing to the “thinker”… 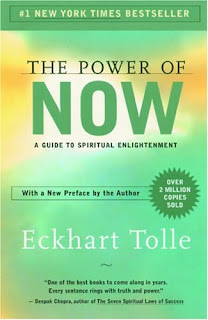