Voila. I did it. After all that talk, I finally put my money where my mouth is and bought myself a kindle. And though it was a rough ride (delivered it to the wrong address; mother almost claimed it for her prize), it’s finally in my possession, shiny and new and smelling like plastic rather than ink and paper.

I’m excited and have absolutely no clue what I plan to read first. I’m currently enthralled by Adam Gopnik’s rolling prose and insightful observations of the ever frivolous French in “Paris to the Moon.” But it’s a physical book, so there’s no rush to just immediately use the kindle.

Instead, I’ve been thinking about what’s next. What will be the first thing I read on my beloved device? What book could possibly deserve the honors?

I’ll warn you that I still haven’t decided. I’m thinking either a fluffy beach read (if the weather ever bothers to warm up) or something Hemingway or France-related. We’ll see. But in my thinking and research, I came across the following sites that offer insightful suggestions for confused readers. 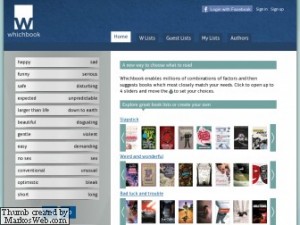 WhichBook.net is by far my favorite resource because its so interactive and suggests books that I’ve never heard of. In short, the site offers various filter “sliders.” Readers can adjust to four factors (samples include length, sexuality, happy or sad, etc.) to specify their tastes, and generate recommendations. The titles–as far as I’ve seen–are small-name books that I oftentimes have never heard of, but who’s to say they aren’t small-name gems? This site is best if you literally don’t have any jumping off point, or if you want to delve into a new style, genre, amount of sex, etc. If the generator doesn’t peak your interest, there are also numerous lists (by both administrators and users) from which to draw inspiration. 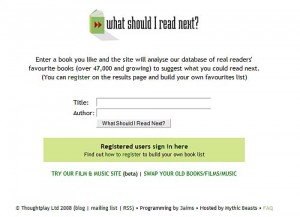 WhatShouldIReadNext.com is also promising. And, yes, I found this by Googling literally “What should I read next?” (Google can be so inspiring!). This site takes a book you know you like and then offers suggestions. It’s nice because you can enter numerous personal favorites and get a wide selection of recommended reads. The downside, of course, is that you get a wide selection of recommended reads, and they’re based largely on similar subjects, rather than similar styles and quality. It’s a simple site, as well, not particularly interactive, and if you want to actually purchase a book, you’ll have to go to amazon or some other site all by yourself. END_OF_DOCUMENT_TOKEN_TO_BE_REPLACED